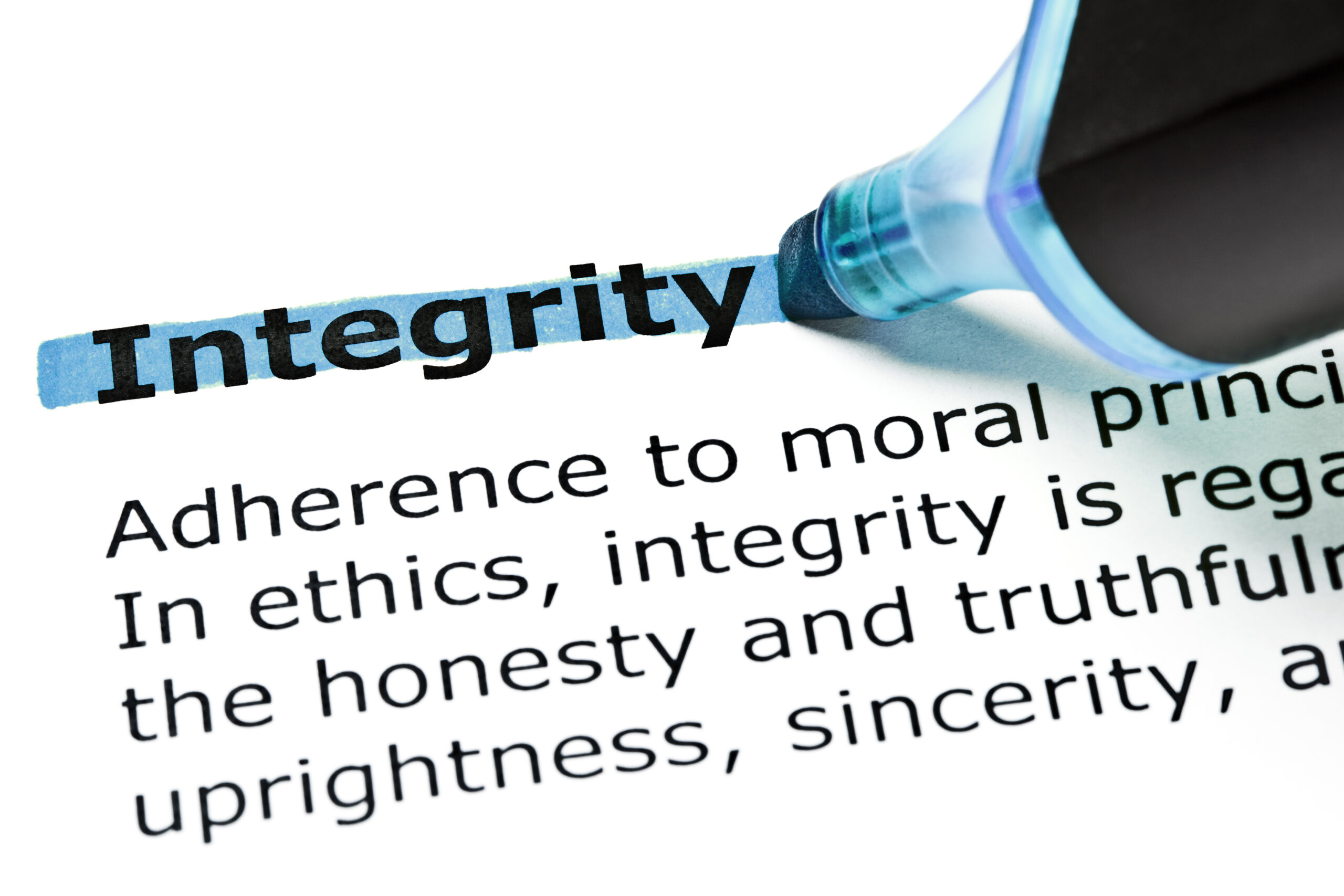 This is a story of a leader we will name Robertson who was once a foreign student in a certain country to further his education at university. As a foreign student, he knew he needed to dedicate more effort to his studies because the course was to be taught in a language foreign to him. He needed to be fluent in speaking and writing the language and to be able to catch up with his mates.

Robertson, the young leader had a set of strong values and principles which would guide him during his academic year. Two of these values were integrity and honesty and his motto was “no matter what happens in the exam room he would not communicate with anyone or cheat in any way. He would not ask anyone or allow anyone to ask him.” These values were his compass and helped him navigate the first academic year of his Doctorate Program. Robertson studied hard to understand the courses and to be the best he could be. He was upholding that personal value of integrity till one day when he happened to be writing one of his difficult papers. It was in a computer laboratory and he could not remember a key formula to help start answering the set of questions. Without that formula, there was no way he could continue the work. Robertson, out of frustration, called somebody to assist him. He compromised his values by cheating during that exam and knew without a shadow of doubt that he had not only failed the paper but had also failed the profound personal test of integrity. He had to re-sit during his doctorate program at the university.

This article is intended to help us learn some valuable lessons from Robertson’s bitter experience. We will propose some five reasons why many leaders fail the life test of integrity.

The word integrity evolved from the Latin adjective integer, meaning whole or complete or intact. In this context, integrity is the inner sense of “wholeness” deriving from qualities such as honesty and consistency of character. Wikipedia defines integrity as the practice of being honest and showing a consistent and uncompromising adherence to strong moral and ethical principles and values. In ethics, integrity is regarded as the honesty and truthfulness or accuracy of one’s actions.

Values are beliefs we choose to guide our lives. Our values are the deep-seated standards that influence almost every aspect of our lives: our moral judgements, our responses to others, our commitments to our goals. When we do not clarify our values and have not taken time to think about them, we can easily fall prey in times of adversity and/ or opposition. As leaders, we should ask ourselves what our values are and honestly answer if we live out these values and are willing to die for them. “Knowing beforehand what your proper response will be to any situation involves a moral choice.”

In his book Winners Never Cheat, Jon Huntsman, Sr., multibillionaire who started a chemical company from scratch and grew it into a multibillion-dollar business shares his own experience in which he steadfastly refused to compromise his principles. Huntsman acknowledged that the key of his success is integrity. He advised, “There are no moral shortcuts in the game of business or life, (…) There are, basically, three kinds of people, the unsuccessful, the temporarily successful, and those who become and remain successful. The difference is character.”

Clearly, defining and clarifying our life values is a must for any good leader who wants to walk in the path of integrity or character.

It is one thing to clearly clarify our life values and another thing to be committed to live them. A writer by the name Freya Stark says “There can be no happiness if the things we believe in are different from the things we do.” Many leaders can argue that they are people of integrity and that integrity is very important for them, but are not willing to pay the price. A lack of commitment to what we call important to us only reveals what we truly believe in. It is said that if you don’t stand for something you will fall for almost anything. The need to stand for integrity is critical and cannot be over-emphasized. “The truth is incontrovertible, malice may attack it, ignorance may deride it, but in the end, there it is”, declares Winston Churchill. True and lasting success is always built on a bedrock of integrity. “Truth is tough. It will not break, like a bubble, at a touch. Nay, you may kick it about all day, and it will be round and full at evening”, emphasizes author Wendell.

“Integrity means telling the truth even if it is ugly. Better to be honest than to delude others, because then you are probably deluding yourself, too.” Being a person of integrity can seem costly in the short term but pays huge dividends in the long term. The true test of character is what one thinks, says, or does when no one is watching. Being bold and courageous can make a leader unpopular but what is popular is not always right; and what is right is not always popular. So is it not worth opting to stand for what you believe in?

According to the Chairman and CEO of Brian Tracy International, Brian Tracy, “having honesty and integrity in the workplace is one of the most important qualities of great leadership in business and I am going to tell you why…Whenever I hold a strategic planning session, the first value that all the executives agree on is integrity. Leaders know that honesty and integrity are the foundations of leadership. Leaders stand up for what they believe in.” Being courageous means also being vulnerable, admitting our mistakes when we are wrong and welcoming feedback whether positive or negative. Humility is a constant companion of integrity, says an author.

The street named “integrity or honesty” is a narrow, uncrowded path. Dishonesty is a wide road. Many leaders find safe harbor in the area of dishonesty. The basic ethic goes like this: If no one sees you cheating (or lying or stealing), then you won’t get caught; and if you won’t get caught, then it’s all right, because unless you are caught you haven’t technically done anything wrong. We must constantly remember that integrity is a matter of the heart and the heart never lies. Leaders need to deal with the issue of honesty or integrity before it deals with us, observed Patrick Morley.

Doing the right thing is not an occasional thing. It is an everyday thing. Sometimes leaders are short-sighted and try avoiding short-term pain for long-term gain. There are many examples of temporary winners who won by cheating. What is sad though is that a business built over years is suddenly destroyed by a second or some minutes’ indulgence in acts of corruption or lies get uncovered after a number of years. Small acts of compromise ultimately destroy one’s character. “The softest pillow is a clear conscience”, advises Norman Vincent Peale.

A man became very successful in the real estate brokerage business. A hopeful protégé asked him how he was able to excel to such heights. “I am just an average, hardworking, honest broker. I am nothing special,” he said. “You see, it is just that many people in this business cut so many corners that an honest and average man like me all of sudden looks great”

Here is a classic experience of a lack of integrity by a business partner which was written in the book The Man in the Mirror “One evening I stopped by the home of a business colleague to drop off some papers. Next to his phone was a notepad with the company logo on it. The company policy manual stated that no office supplies were to be consumed for personal use. From that day forward my confidence in him was never quite the same. For him, that was an expensive pad of paper” “ If you tell the truth, you don’t have to remember anything” emphasized Mark Twain.

Patrick Morley narrated in his book, The Man in the Mirror, his experience – “A man sitting next to me on a plane ordered a drink- a bourbon and coke. The busy flight attendant said she would come back to collect his money, which he left lying on his tray table. She passed up and down the aisle several times. It became obvious the flight attendant had forgotten about his money. After she made a half dozen trips past us, my aisle-mate reached over, picked up his money, and slipped it back into his coat pocket. Integrity-what’s the price? Sold for $6 drink.” Many people, leaders included, think first about ‘huge’ indiscretions when we talk about dishonesty or corruption. We forget that if we are dishonest with little, we will also be dishonest with much.

In conclusion, Patrick Morley gives some brilliant advice which in my opinion summarizes the best way to solve the problem of integrity, “one dilemma we all face is deciding whether or not to be honest on a case-by-case basis. During the course of a normal day we each have scores of opportunities to lie, cheat, and steal. If we must decide each time we make a decision whether we will be honest or not, we consume a lot of energy and run the risk of making a sloppy decision and compromising our integrity”.